With the REF10 SE120 the improvement was quite dramatic. I can describe it as added glory. – Jules Standen, www.gearspace.com, UK 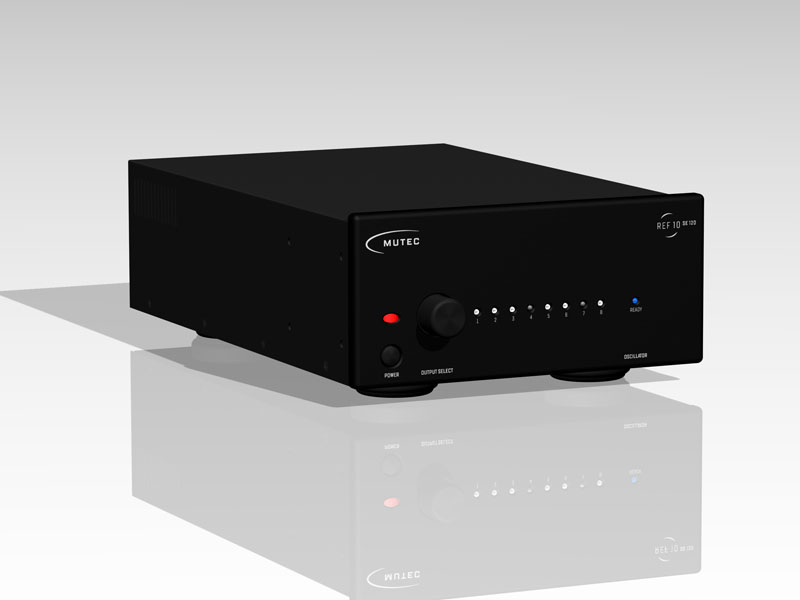 The REF10 SE120 is a special version of the successful audiophile reference clock generator REF10 that we have further enhanced in terms of signal performance. The exceptional quality of the original REF10 has been confirmed many times since its launch in 2017 – in numerous reviews from specialized magazines and through enthusiastic user feedback. A clock generator from MUTEC significantly increases the quality of digital music playback, even and especially with demanding high‑end systems and studio installations. Because it provides the foundation for perfect signal processing in a digital audio chain: the extremely low‑noise reference clock.

The "tuning" variant REF10 SE120 outperforms the original model REF10 in this regard considerably. A clearly measurable advantage is the result of a special feature of the REF10 SE120: its much more elaborately manufactured and selected oven‑controlled quartz oscillator (OCXO). This oscillator is selected according to the strictest standards in test procedures lasting many hours with the help of exceptionally precise and expensive measuring technology. The use of such an outstanding oscillator is responsible for the fact that the REF10 SE120 from MUTEC currently delivers - to our knowledge - the lowest phase noise, respectively jitter values in the industry. This outstanding technical performance has a noticeable impact on the sonic result. Precision, transparency, spatiality and dynamics of the musical presentation reach an unprecedented level and will inspire you!

Like the proven REF10, the optimized REF10 SE120 is extremely flexible. Because of its versatile connectivity this MUTEC clock generator can be successfully integrated in a wide variety of configurations while maintaining an easy way of operation. If you want to maximize the sound potential of your compatible DA converter, music server or audio re‑clocker in every respect, you need the REF10 SE120 from MUTEC! 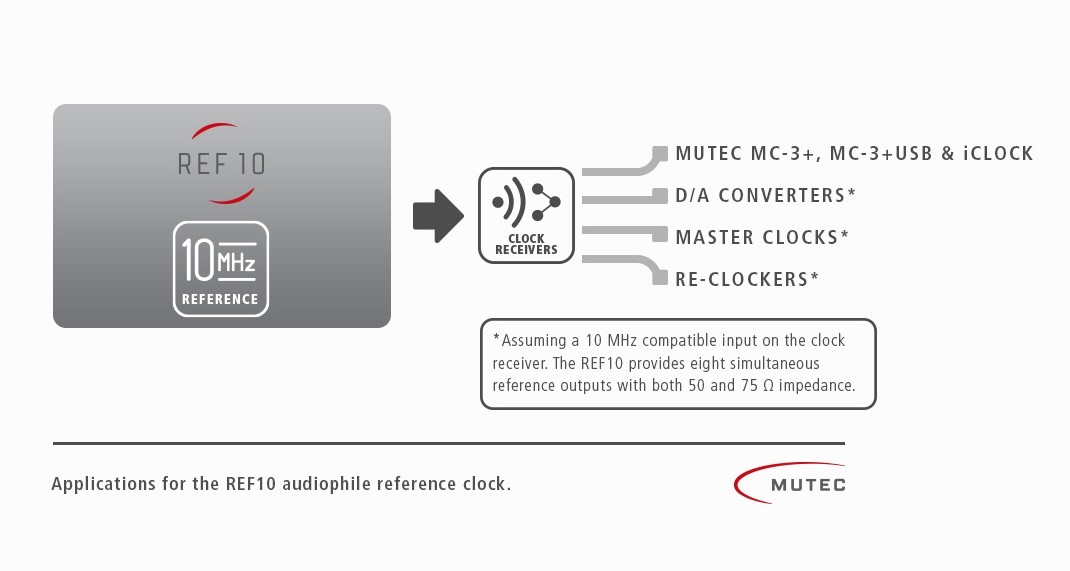 The Development towards the REF10 SE120

The great success of the well‑established MUTEC REF10 has proven the extremely positive, clearly audible influence such a meticulously developed reference clock generator has on the sonic performance of a digital audio system. Despite the worldwide praise of the device by users of all kinds, MUTEC is always driven by the same question: can we do even better?

The positive answer is available in the shape of the REF10 SE120. Because already during the development of the REF10 we noticed how extremely important the selection of the central clock oscillator is. Its quality determines the technical and consequently also the acoustic result of a reference clock generator to a considerable extent. That is why the renowned German developer of the REF10 has been appointed to help improving and optimizing the production processes around the new ultra‑low phase noise oscillator to make it successfully suitable for being the heart of the REF10 SE120.

The basis for this new oscillator is naturally a SC‑cut crystal material, but here it gets very elaborately selected especially with regard to the ultra‑low phase noise specifications to be achieved. After assembling and by using specialized and cost‑intensive measurement technology, the selection of the oscillators continues with three‑stage in‑depth measurements. Thus, after the last measurements individual specimens from large production quantities can be selected successfully as the best oscillators for use in a REF10 SE120.

These oscillators reliably offer phase noise values of <‑120 dBc measured at 1 Hz offset from the carrier frequency of 10 MHz. Values like this have never been reached before! Such technical performance also positively influences the phase noise at audio-relevant measuring intervals of 10 Hz and 100 Hz. As a result, a REF10 SE120 offers uniquely low jitter measured values of an average of <15 fs in the crucial measuring range between 1-100 Hz! 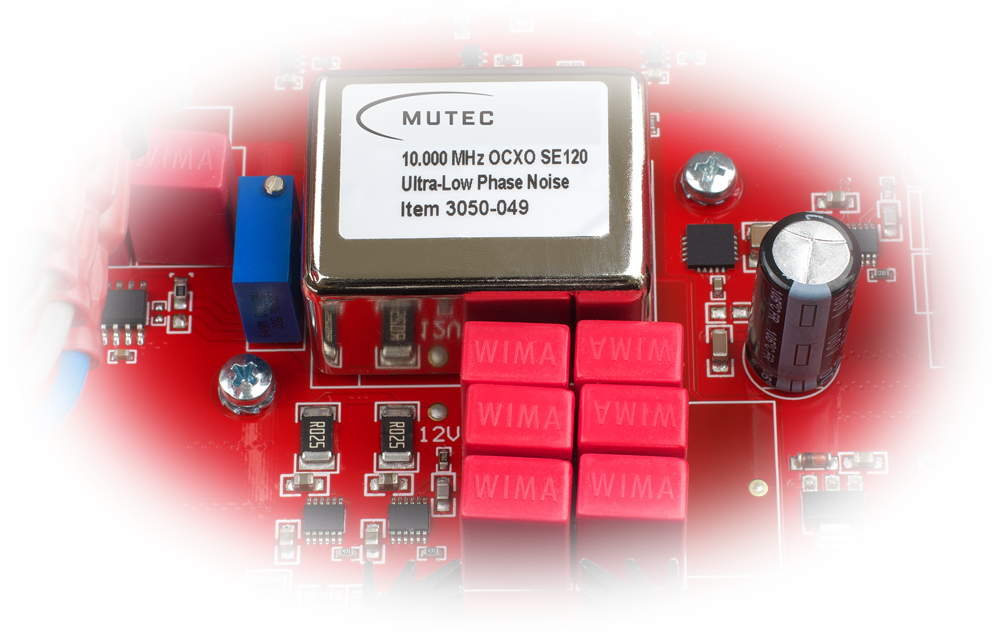 Naturally, only a small number of oscillators complete our demanding test course for selection successfully. That is why the REF10 SE120 will only be available in small batches. The lucky owners of an exclusive REF10 SE120 will gain a fascinating experience. The musical reproduction quality of their high-class audio setup fuelled by this special edition of the REF10 rises significantly – especially in the areas of precision, transparency, spatiality and dynamics. The REF10 SE120 is currently not only the absolute top product in MUTEC's Empyreal Class, but also claiming the industry-leading position in the field of audiophile reference clock generators.


Stability Factor vs The Myth of the Atomic Clock

The so-called “atomic clock” is generally regarded as a prime example of extraordinary frequency precision. However, our research has shown that the high clock stability of atomic clocks based on a rubidium or caesium oscillator is limited to the long-term time domain. This long-term stability refers to the amount the absolute clock frequency (10 MHz, or 10 million cycles per second, in this case) drifts over time. While this long-term stability may be useful for some telecommunications applications, it is essentially irrelevant for digital audio purposes. In fact, the accuracy of the time interval from one sample to the next sample determines the sound quality, i.e. the stability viewed in a very short time range. Changes in this short-term stability are usually measured as jitter or phase noise. These are decisive for the sound quality of all digital audio devices.

In contrast to these atomic clocks the REF10 SE120 is engineered around MUTEC’s extremely elaborately selected, handcrafted, oven-controlled quartz oscillator (OCXO) made in Germany. This OCXO offers a standard-setting frequency stability in the time domain relevant for audiophile music playback.

MUTEC has created an optimal environment for the exclusive OCXO within the REF10SE120.

It starts in an essential segment for every high-end component: the well designed main power supply. Therefore, a double linear power supply is used, based on a toroidal transformer made in Germany. It provides a dedicated transformer winding for the sensitive OCXO that is completely isolated form the surrounding circuit. Networks of lowest-ESR (equivalent series resistance) capacitors made by prestigious manufactures ensure best interference suppression for the supply voltages. Hereafter, sub-Hz optimized, lowest-noise voltage sources arranged in multiple stages independently supply every part of the circuit to avoid mutual interference.

For the heart of the REF10 SE120, the handcrafted OCXO, we went even further by developing a voltage source with exceptionally low noise. In line with this, extremely low-noise clock distribution and amplification circuits ensure that the reference signal of the quartz oscillator in the audio-relevant measuring range of 1-100 Hz distance from the carrier frequency (10 MHz) is transported loss-free (!) to the eight outputs of the REF10 SE120. 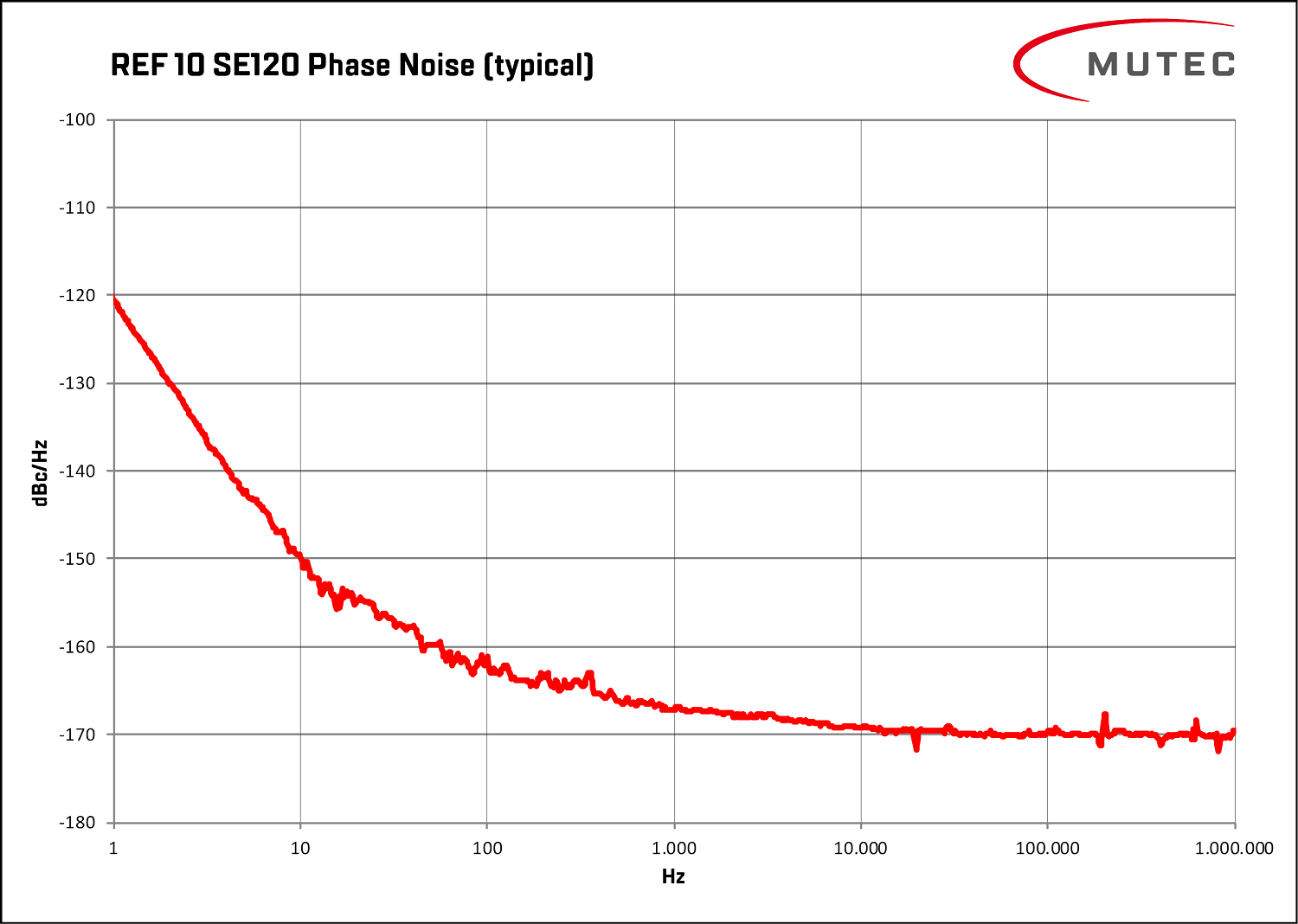 Based on our knowledge of the importance of a clock signal’s rise time (steepness of the edge) for the digital audio performance, the REF10 SE120 delivers square-wave signals with very high slew rate and lowest ripple at the outputs.

In contrast to the low slew-rate sine wave signals used by competing brands, this leads to superior lock precision in terms of speed and stability and therefore minimized jitter at the receiving end. This fact is i. e. largely responsible for the sound quality improvement of connected DACs and audio clock generators. 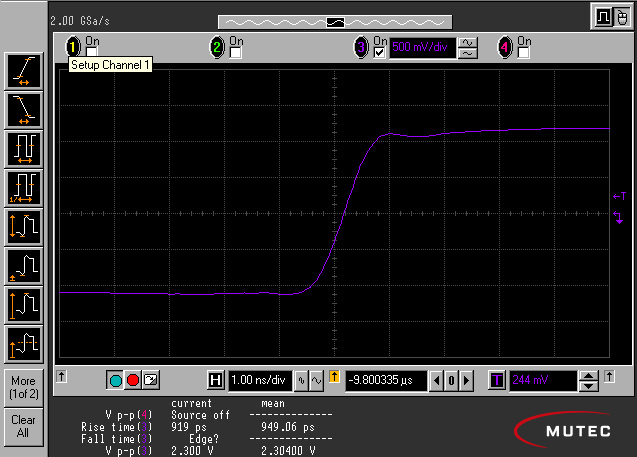 An often discussed topic among audiophiles is the negative influence of RF (radio-frequency) interference in digital audio playback. In order to shield the REF10 SE120 from such RFI and other interference we are placing the circuit boards in a 1.5 mm thick steel enclosure. In contrast to the commonly used aluminum housings, the shielding of the electronics and thus the insulation against external disturbances is significantly improved hereby. Therefore, any external high-frequency interference does not have a detrimental effect on the noise and jitter freedom of the generated clock signals.

RF interference can also enter the circuitry via the mains power connection. To avoid a power line interference as best as possible, we have equipped the REF10 SE120 with one of the best premium brand-name power entry modules currently available. This module offers enhanced low frequency filtering and superior EMI immunity. As part of its mechanical design there are no open unfiltered power cables inside the unit. Another aspect where the REF10 SE120 distinguishes itself from many other products on the market.

In order to minimize the susceptibility to hum caused by ground loops all output stages of the REF10 SE120 are galvanically isolated. Each BNC reference clock output can be switched on and off individually, so that only the required outputs have to be active. This special feature of the REF10 SE120 also helps to minimize high frequency interference as much as possible.

The REF10 SE120 is a reference clock that fills the term “reference” with meaning in two ways. First, because of its function: it generates an optimized master clock to which all subsequent devices in the digital audio chain refer to. Second, because of its quality: as the top product from MUTEC, the REF10 SE120 also represents a new standard in this specific category of audio components. This master clock generator sets new peak marks in the key areas of phase noise, respectively jitter.

The amazing sound performance – based on superior technology – can be easily realized in many different audio setups. Because the REF10 SE120 is straightforward and extremely flexible to use. You do not have to worry about system integration at all - instead, you can fully enjoy the best possible music playback straight away. With the help of a REF10 SE120 the audiophile sound quality of compatible D/A converters, music servers and audio re-clockers will be increased to the highest possible level.

The REF10 SE120 is the perfect match for devices with a 10 MHz input, such as MUTEC's MC3+ and MC3+USB Smart Clocks as well as the iClock and iClock dp.

Eight simultaneous available clock outputs at both 50 Ω and 75 Ω impedance allow you to use the REF10 SE120 in combination with not just MUTEC products, but also 10 MHz compatible components by other third-party manufacturers.

Jitter performance of the REF10 SE120 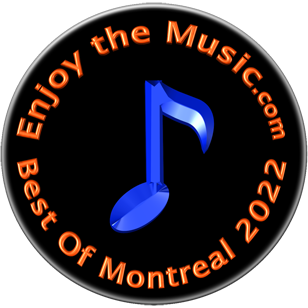